Loyalty is a rare trait in modern football with the one club player being scarcer and scarcer in this day of salary caps, points and chasing the quick dollar.
If there is one thing the last three weeks of success at the East Burwood Football Club proves is that loyalty will be rewarded and to see the absolute joy on the faces of those players who have stuck with the club through the recent lean years was a heart warming experience. Players like the Browns, the Winders, Jarrod Stafford and Codey Lucas who have remained loyal to the Rams but most of all the joy on the face of Craig O’Malley who will this week play his 450th game for the East Burwood Football Club on Saturday April 28th. 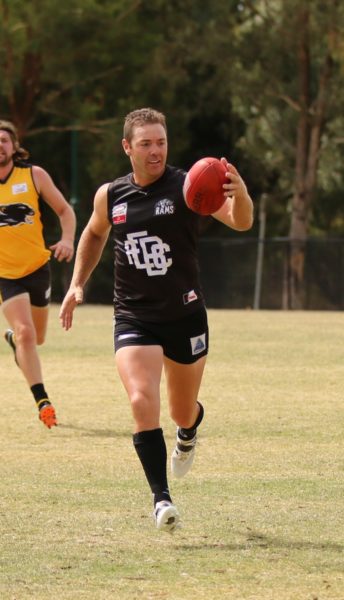 Craig played his first game for East Burwood in 1990 as an eight year old playing in the Under 10 team where he would play over 50 games. The club only fielded four junior teams at that time. He won the Under 10’s Best and Fairest in 1992 as captain and followed up with the Under 14’s B&F in 1996. He also finished runner up in the Under 16’s B&F. He enjoyed success with the Under 14’s and Under 16’s playing finals in both divisions. Premierships followed with the Under 18’s in 1999 and again in 2000.He played a total of 167 games for the junior football club.
He was selected in the Oakleigh Chargers development squads at under 15’s, under 16’s and played approximately 10 games for their under 18’s.

The success continued after his transition to senior football with reserves premierships in 2001 and 2003 where he was judged best on ground in both Grand Finals. He also experienced Grand Final pain being part of the infamous loss in 2002 when the seniors held a 33 point lead at three quarter time before going down to East Ringwood. In 2004 while still playing senior football he was joint coach of the Under 15’s side that celebrated a premiership.
He continued coaching junior sides at the club over the next few years and also had a stint as coach of the reserves.

Craig is one of the very few people to achieve Life Membership for the club while still participating, as an active player such was his impact at both Junior and senior levels. He has served on the committee for a number of years taking responsibility for organising social events at the club.
He has also contributed generously to the Rams through his business as a sponsor of the senior club.

167 junior games, 283 Senior Games, Coach, Sponsor, Committee member and life member it is doubtful if any individual has contributed as much to the club over this period. He is greatly respected by all at the club and always makes time for younger players as they make their way into the seniors.

The ultimate one club player who deserves all the rewards that comes his way.