Saturday 28th May @1pm at home vs Heathmont.
Come grab a few beers and a burger on us, catch up with some players from across all eras , and watch the seniors take on Heathmont.. look forward to seeing you all there .. 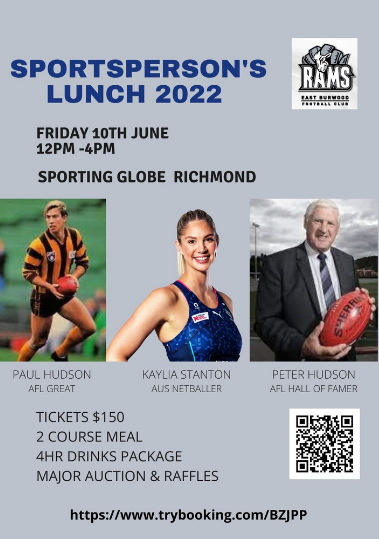 Peter Hudson – AFL hall of famer – Hudson is considered one of the greatest full-forwards in the game’s history. He holds the highest career goal-per-game average!

The East Burwood Football Club wishes to pass on its sympathies and condolences to the Stewart family on the recent passing of Paul Stewart. Paul coached at the club for many years and coached the reserves to a premiership in 1987. He was still a frequent visitor to the club until his illness. Peter passed away on Good Friday and will be greatly missed.

The greatest night on the Rams calendar is here once again (finally in person and not on zoom!).
Same system goes as previous years. Ticket’s are $100 each and that admits 2 people with free beer/wine/soft drink and finger food.

Make sure to grab your tickets asap, as they always sell like hot cakes!

Lock these events and dates into the diary now! 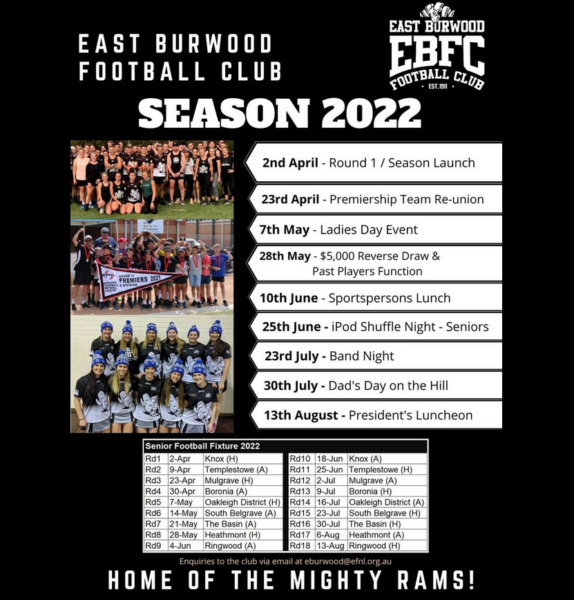 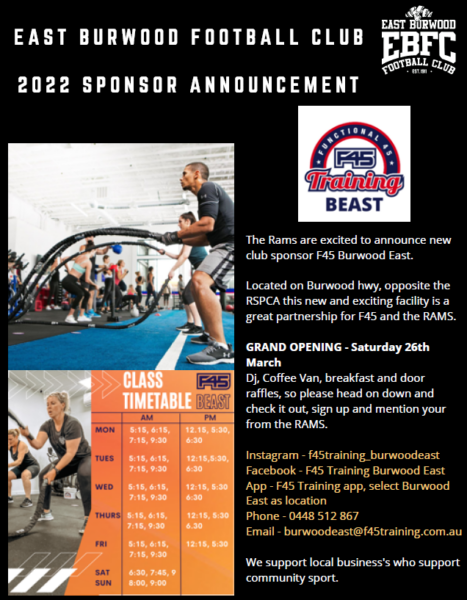 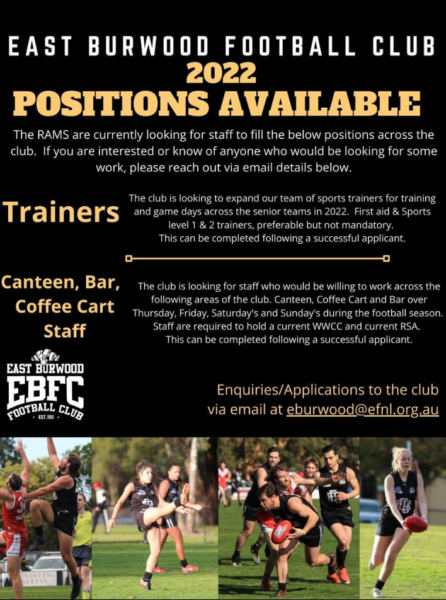 East Burwood is extremely excited to be able to offer the families in our areas 2 options for children aged between 5 – 12 to participate in Auskick for 2022. 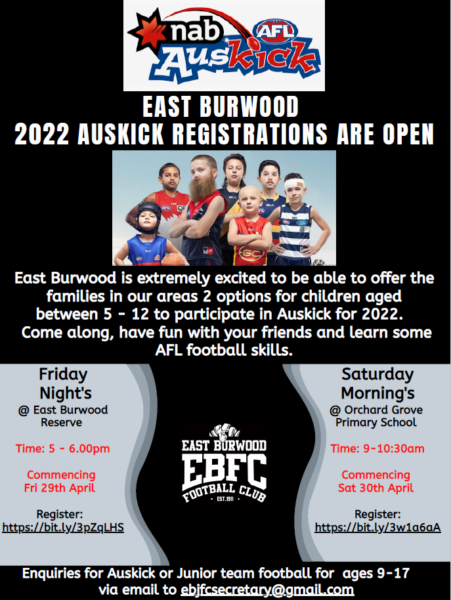 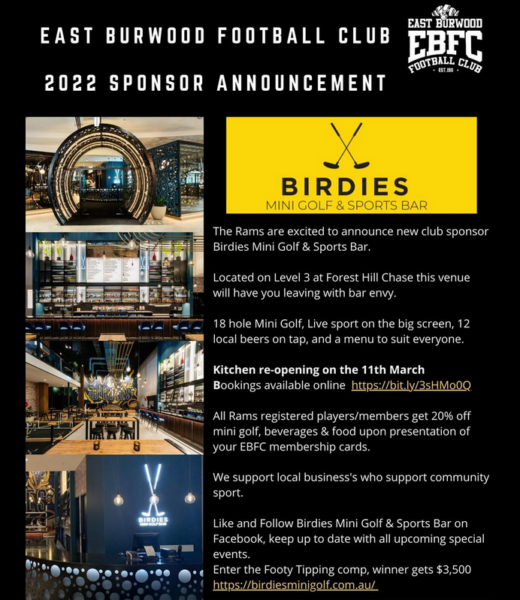 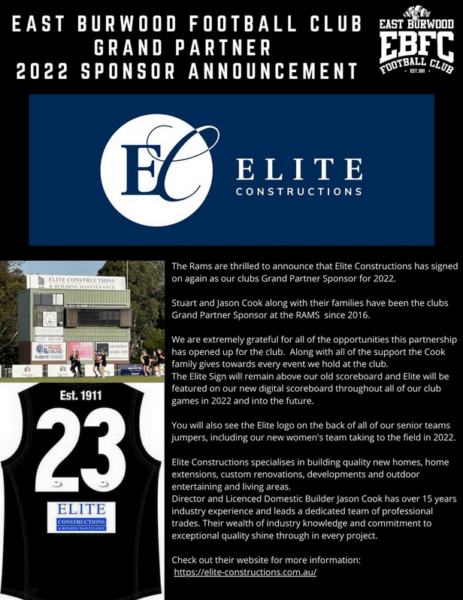 Just a reminder to all the players out there that the U11’s are Premiers for 2021 with their medal and cup presentation done at the family day. Everyone at the club is so proud of you all! 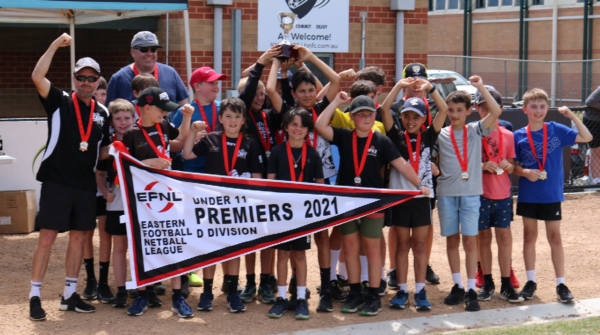 It’s been a tough couple of years for EBFC with greatly reduced income and all clubs need money to survive. Bills don’t stop even when play does!

Please help out by buying a membership.

Click on the image below to download the form, fill it in and send it back to the email address listed at the end of the form and help our your club. 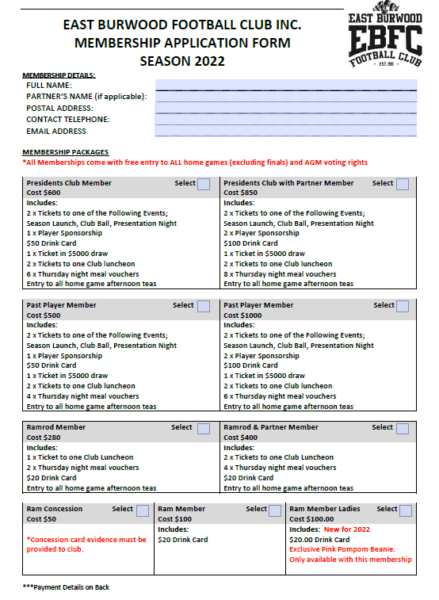 This is our major fundraising event for a new state of the art Electronic Scoreboard! 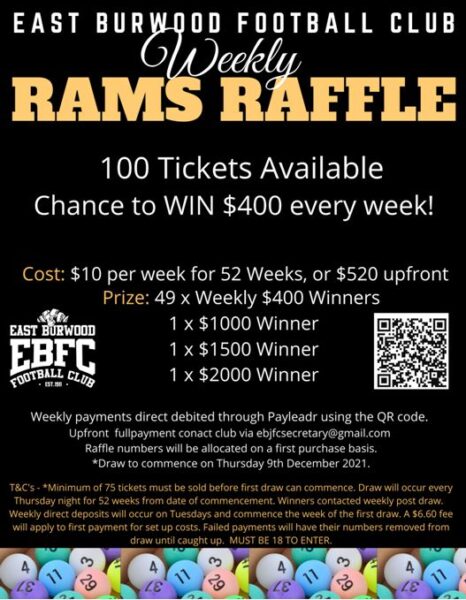 The 2021 Div 3 Reserves Minor Premiership Cup made it’s way home to East Burwood Reserve. Well done to everyone who made this happen! 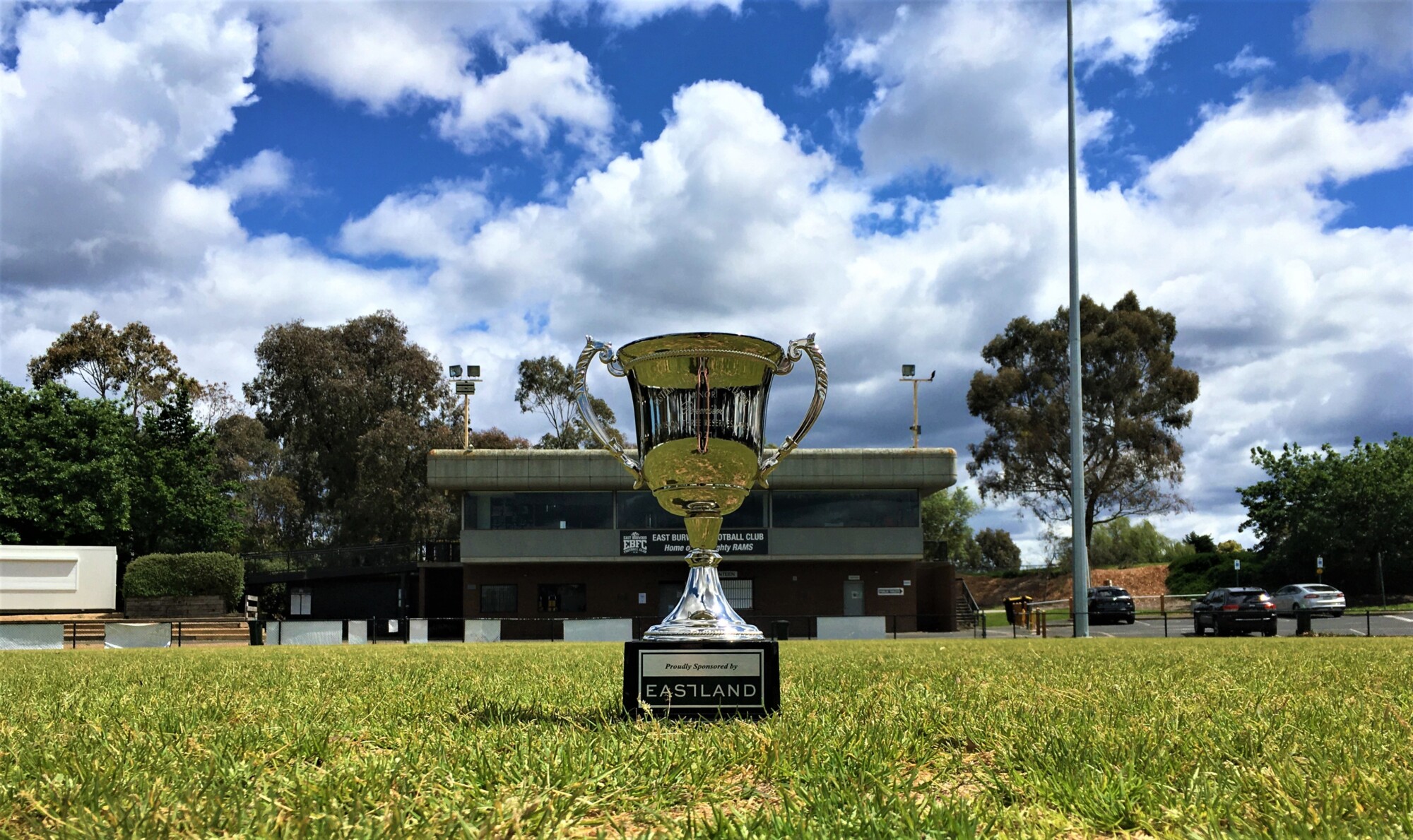 The East Burwood Football Club is today mourning the loss of yet another great clubman Peter “Dicko” Dickson.
Past Junior Club President, committee member and club Life Member Peter will be remembered for all of his hard work and devotion to the RAMS football club spanning many years.
Most famous for being part of our amazing Beer Booth crew, Dicko will be sorely missed by all at our club, with his welcoming smile and quick wit.
The club sends its condolences, thoughts and prayers to his wife Allison, children Sam and Nicky and all of Peter’s extended family during this time. 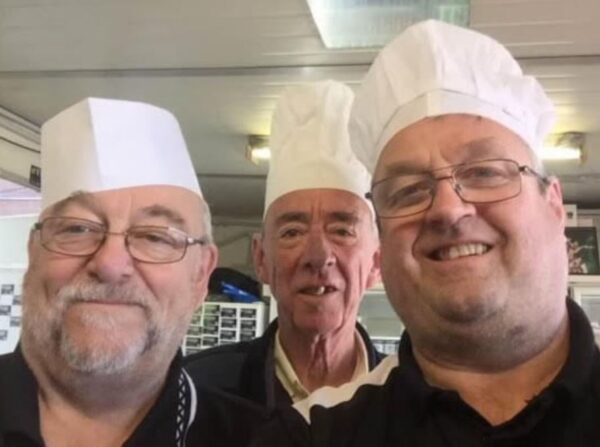 ENJOY YOUR FISHING TRIP MATE…!
YOU WILL BE MISSED

ATTENTION ALL PAST PLAYERS!!!!

Rams Past Players Day Saturday 28th May @1pm at home vs Heathmont. Come grab a few beers and a burger on us, catch up with some players from across all eras , and watch the seniors take on Heathmont.. look forward to seeing you all there .. GO RAMS!

On this day, above all days, we remember those Australian men and women who died or suffered in the great tragedy of war. On the morning of April 25th, 1915, Australian and New Zealand troops landed under fire at Gallipoli, and it was then and in the violent campaign which…

Thanks to our Major Sponsors