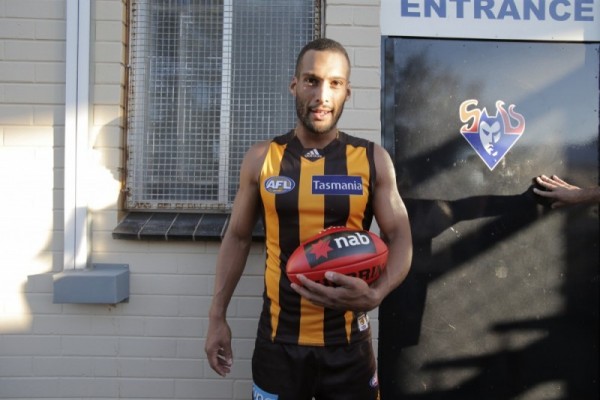 The East Burwood Junior Football Club will receive a Sherrin Football Pack thanks to the NAB Supergoal kicked by Josh Gibson in the Hawthorn v North Melbourne NAB Challenge match.

Introduced in 2006, the grassroots initiative sees NAB donate $500 worth of footballs to an AFL player’s nominated junior club when they kick a NAB Supergoal – a goal kicked from outside the 50 metre line during the 2015 NAB Challenge. The monster kick not only adds nine points to the scoreboard, but also adds a raft of football supplies to the star’s junior club – each of which receive a Sherrin carry bag containing six Sherrins in assorted sizes to benefit all age groups.

Josh was originally recruited to the North Melbourne Football Club in selection seven in the 2005 NAB AFL Rookie Draft. He was traded to Hawthorn in 2009.  Josh said he was pleased that his junior club was benefiting from his performance at the elite level. “Junior footy at the grassroots level is the foundation of the game – it’s where you learn to play the game and develop a love for the sport. I think it’s great NAB is helping local clubs, I’m sure the footballs will be put to good use,” he said.

Since 2006, NAB has donated over $280,000 worth of cash and resources to junior football clubs through the NAB Supergoal program, assisting with the future development of potential AFL stars. It’s all part of NAB’s commitment to Footify Australia and grow the game.NAB has been Footifying Australia for over 10 years through NAB AFL Auskick, the NAB AFL Rising Stars Program, the NAB AFL Trade Period and the NAB Challenge.