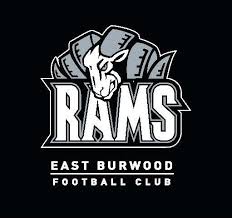 The East Burwood Football Club would like to announce the following senior coaching appointments for the 2018 season.

This group brings a wealth of experience and a proven track record of success to the East Burwood Football Club.

Stuart is a dual premiership player having played over 300 games in the EFL. He was leading goal kicker in the EFL on four occasions and coached Knox to a premiership. Last year he was the development coach at the Knox Football Club.

Adam is a four time best and fairest winner, life member and hall of fame member at East Burwood. He enjoyed premiership success at the Rams in 2000.

Luke tasted premiership success at East Burwood in 1999 and 2000. He played more than 150 games for the club, coached the reserves to a premiership in 2005 and served as senior coach in 2006.

Scott played more than 100 games for the Rams. He has coached at all levels in the EFL. He holds a degree in fitness and wellbeing.

What these four guys share apart from a rich history of success is a passion for the East Burwood Football Club. They are fully committed to instilling a winning culture at the club and restoring the club to being a power house of the EFL.

They want to make the Rams a destination club and to develop the next premiership team from the talented group of young players already at the club.

The committee would like to welcome all of these guys and their families back to the club and hope their return will inspire others to get back to the club in 2018 and put the Rams on the path to sustained success.