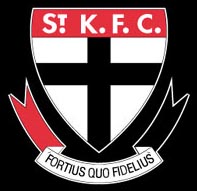 The East Burwood Football Academy has been busy working on the goal of providing young players with additional support to help them develop to their full potential.

The latest event arranged through the academy was for the Ram’s U/17 team, who swapped a training session for a tour of the St Kilda football club facilities, at Seaford on Wednesday April 10th.

Twenty Six players and 2 coaches were shown around the facility by Saints Football Services Manager Luke O’brien. The boys were shown a number of areas which included the stadium where the AFL players can shoot hoops, hone their skills, stretch and warm up before going on to the ground to train.

The boys were also shown the recovery pool, gymnasium, trainers and medical rooms, the area that the players meet with the team leaders and line coaches. They were also shown the main theatre where the St Kilda head coach and former Rams Senior Premiership coach Alan Richardson meets with players on a regular basis. Luke O’Brien (Football Services Manager) used this theatre to speak to the boys about what was talked about in the player/coaches meetings and showed them a number of statistical areas that are looked at leading up to and after the games have been played.

When Luke finished his talk Rams captain Harvey Gibson thanked Luke and the St Kilda football club for allowing them to see what it was like at an AFL football club facility. On the way out the boys were given a drink before getting back on the bus and heading back to East Burwood.

A great night was had by all.