The East Burwood Football Club are saddened to hear of the passing of club life member Peter Bowie this morning. The club would like to pass on its sympathies and condolences to his family and friends. One of those closest friends Graham Dale has written a tribute to Peter. 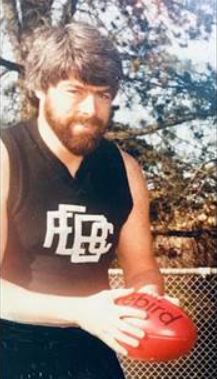 For the past 20 odd years there has been one constant at East Burwood Reserve every Saturday afternoon. Two mates who shared premiership success at the Rams during the 1960’s would arrive together to see how the latest version of the team would fare that afternoon. One of these mates was Peter Bowie who sadly passed away this morning the other was Graham Dale who penned the following tribute to his former teammate and great friend.

Peter Bowie commenced playing football with East Burwood at Under 17 level in the mid 1960’s. He was experiencing a growth spurt at the time so it became obvious he would develop into a tall key position player. Maybe because of his height, his style of play showed some awkwardness, but it was not long before he physically matured to go along with his football ability.

At the age of eighteen he was part of a senior premiership team at the Rams in 1967 and repeated the feat in 1968. At that stage Richmond Football Club were showing some interest in Peter but his football career was stopped in its tracks when contesting a mark in the goal square his left leg curled around the goalpost and an uncontrolled landing seriously injured his knee.

The extent of the injury had a huge and immediate impact on Peter’s life restricting his ability to work and play any sport. In 1973 he decided to return and played with the reserves side in the second half of that season paving the way for a recommencement of unfinished business. In season 1974 he was awarded the East Burwood Best and Fairest.

His comeback was successful and in 1980 playing under new coach Barry Price he was awarded life membership of the club having played more than 300 games. While also playing football at Forest Hill and Bennetswood, Peter played a total of 308 senior games for the Rams and was awarded Life Membership of the Eastern District Football League.

Peter’s positive attitude and mental toughness were always his strong points along with his protective nature when any teammate was physically mistreated on the football field. While his playing career took priority, he also served the club on many committees and when his playing days ended he was always happy to assist with gate keeping, umpire escorting and general maintenance around the ground.

He thoroughly enjoyed the social environment at the East Burwood Football Club and made many lifelong friends.